The clean-cut profile of the Cathedral dominates Como is historic centre and cannot but catch the eye of the traveller reaching the town from the mountain-passes, the plain or the lake. Built not far from the lake, dose to the old bishop’s palace which overlooked a wet basin, it stands as a marked emblem of the period in which Como and its lake were at the heart of the network of lines of communication of the day, connecting Italy to both northem and central Europe, since its architecture, sculptures and paintings testify to the convergence between transalpine and Italian figurative arts.

The Cathedral, work upon which was started in 1396, was built in different stages over three centuries and a half; the cupola was completed in 1744. The architectural design characterising it is an articulated and complex one, thanks to which totally unlike interpretations of space and very different styles merge into a single building. Although built over a long period of time (the façade and the Gothic naves date back to the 15th century, the presbytery and side apses to the 16th and the cupola to the 17th), it has preserved a harmony which, from age to age, has been reiterated by connecting the new parts to the proportions defined in the previous age. 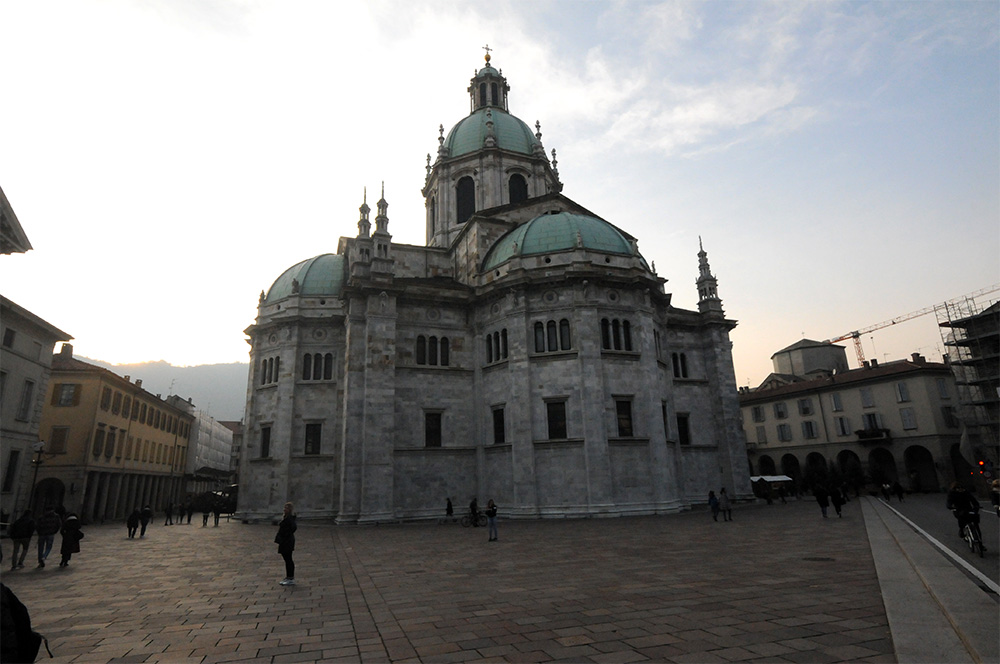 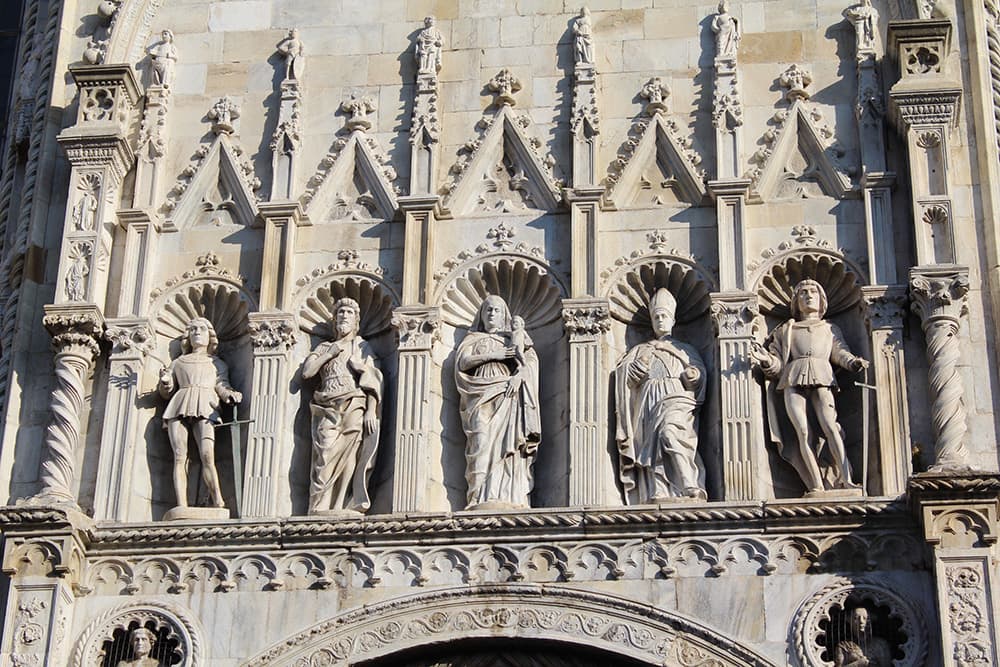 The architecture of the Duomo is a masterpiece of harmonic mixture of all the historical periods in which it was built. The various architectural styles (gothic, Renaissance, baroque) are magistrally brought together by the wisdom of the architects and the skill of the artisans that contributed to its construction.
There are three gothic naves, with pointed arches and rib vaults, built in the XIV th century, on which three Renaissance apses open, built between the XVI th and the XVII th century, over which, after many discarded projects, a late-baroque dome designed by Filippo Juvara was erected. Just like Milan’s Duomo the name of the architect of the gothic cathedral is unknown.
The first designer officially credited is Lorenzo degli Spazi, an architect from Val d’Intelvi. Working for the construction of Milan Cathedral, he he provided  consultancy to the city of Como. Pietro da Breggia, from Como, supervised the construction of the pillars and vaults. Florio da Bontà (1460-1463), once again from Como, began building the facade with another sculptor from the val d’Intelvi, Aizio de Lurago. Luchino Scarabota, from Milan, finished the rose window and the main spire of the facade.
In 1484, Tommaso Rodari from Maroggia, on lake Lugano, was called in to complete the many statues of the facade.  Three years later he was nominated engeneer of the factory and kept on creating sculptures until his death in 1526, alongside his brothers, Giacomo and Donato, and his apprentices: the sides of the basilica, all the portals with the lunettes depicting the Childhood of Jesus, as well as the astounding Door of the Frog, from the statues of the apostles on the inner pillars, to the main apse, constructed on the modified designs by Cristoforo Solari, “the hunchback”, who introduced the classic architecture, with grooved corynthian and composite-style lesenes, entablature and round arches.

Inside the Duomo are kept many precious tapestries and sculptures of differing styles, some of which date back to the first cathedral: the romanesque lions converted into holy water fonts and the high altar adorned with gothic reliefs carved into white marble dating back to 1317, the sarcophagi of the bishops Avvocati (†1293) and Bonifacio from Modena (†1352); the Renaissance stone altars that originally were painted, three of which by Tommaso Rodari; the stuccoes of the apses’ vaults depicting theAssumption by Francesco Silva and the Resurrection by Agostino Silva, the Evangelists by Gaspare Mola from Coldrerio on the dome’s pendentives, and Pompeo Marchesi’s neoclassical sculptures (in the central apse and the altar of saint Joseph).
Among the XVI th century painters is worth menctioning Bernardo Luini, Gaudenzio Ferrari, Antonio Sacchiense from Pordenone and, for the XVII th century, the Morazzone. Also worth of menction are the vaults’ decorators Carlo Fontana and Francesco Gabetta (1839) and, among the stained glass decorators, the Bertinis (XIX th century). 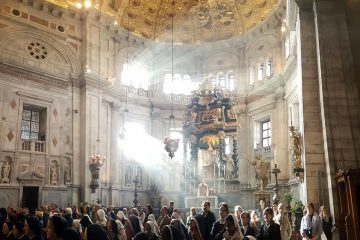 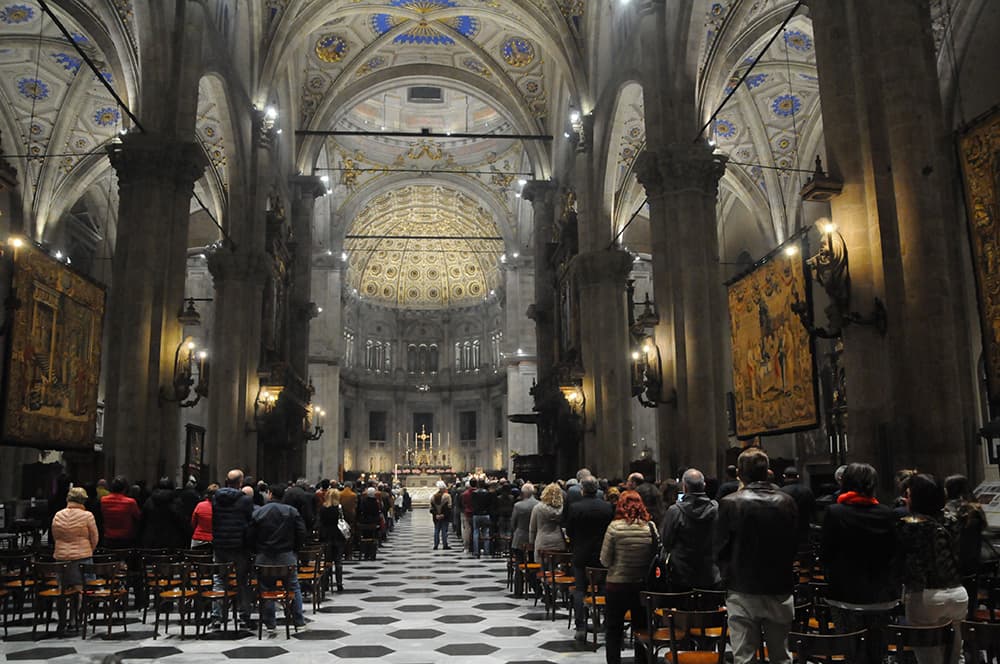 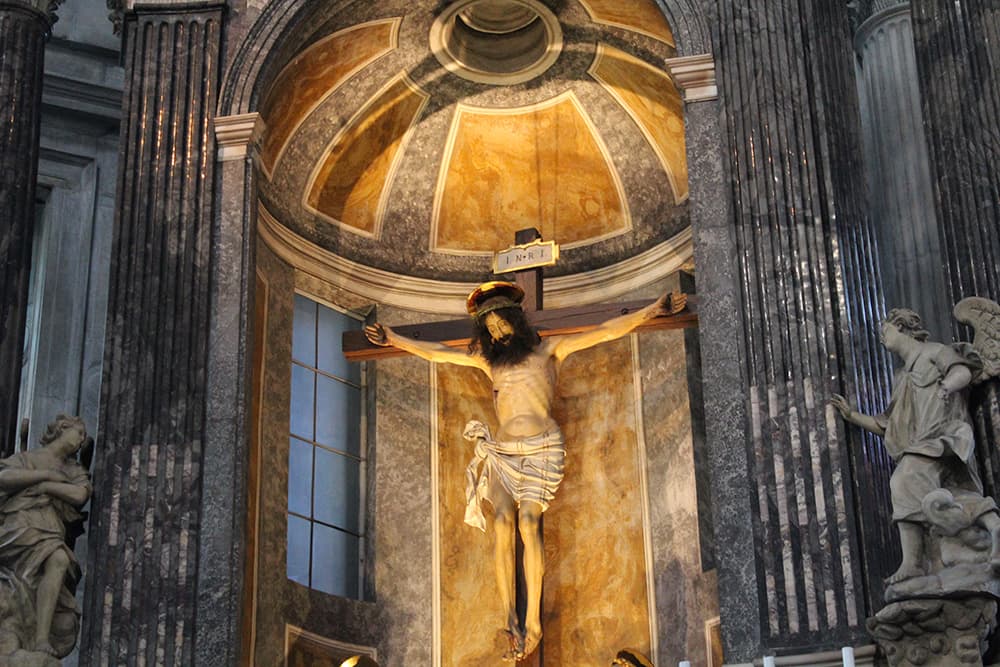 The two large organs occupying the end arcades of the Gothic area were made in the early 17th century, first the one on the left, then the one on the right, and were inaugurated on the occasion of the festivities for Annunciation Day in 1650. The cases, which are the visible architectonic elements of the instruments, are Baroque in style. The Baroque forrns constitute an element of transition from the Gothic areas to the Renaissance ones of the transept and apses.
The wooden organ case consists of precious balustrades alternating with music-playing angels and of a classical portal crowned with a broken tympanum; the front pipes are grouped inside the portal. The two organs are similar in shape, it is the details which are different. A statue of Our Lady of the Assumptìon, flanked by two trumpet-playing angels, stands on top of the left-hand side organ; in the one on the right saint Abbondio between two angels with bugles.
The oldest document testifying to the presence of an organ in the Cathedral dates back to 1441.
Nowadays the instruments to be found are the Great Organ in the antique left-hand side case, the Positive and Recitative (expressive) in the right-hand case, the Echo organ placed in the Carpano room above the Vestry of the Canons, the Choral organ behind the altar, which means 69 organ stops and 6.515 pipes.
Over the centuries the instruments have undergone a number of changes thus adapting to the technical innovations introduced.
In the 16th century, it was the Antegnatis, Baroque and Renaissance organ building masters, who held the scene; the right-hand organ was made by the Flemish Jesuit William Hermans in 1649; in 1808 it was the Serassis who worked on the organs, which – in 1932 – were renewed by the Balbiani Vegezzi Bossi company from Milan.
Restoration work was last carried out in 1998 by the Mascionis, a renowned family of organ builders, who had already worked in the Cathedral in 1928. 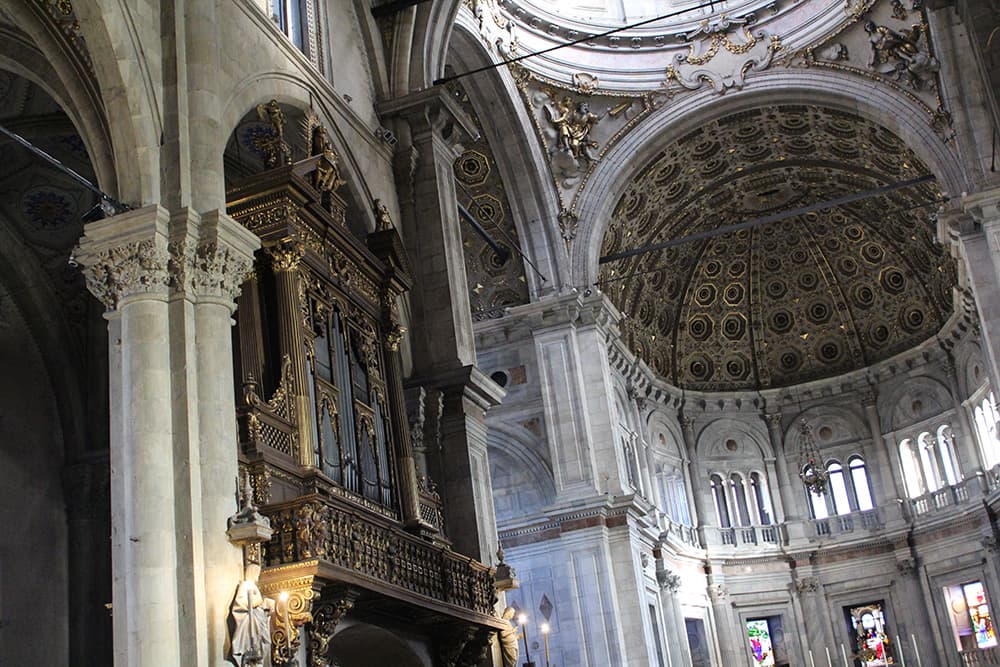